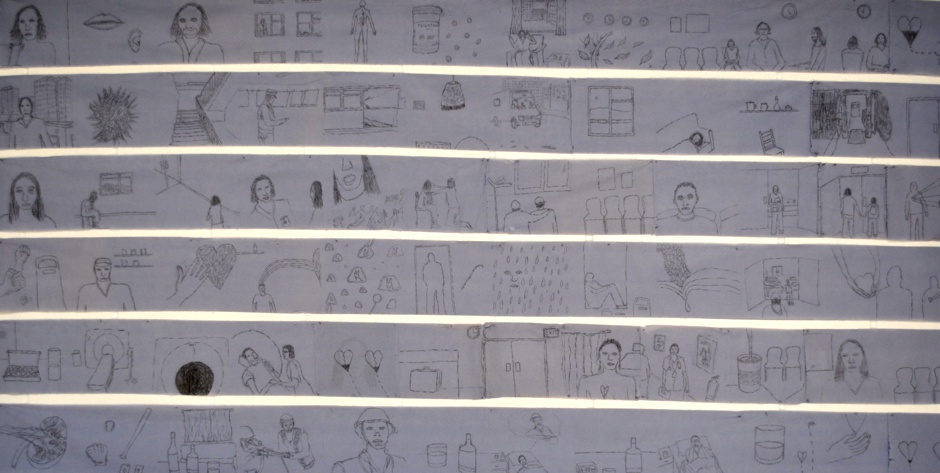 My work explores and documents human behaviour, illuminating the perspectives of individuals.  I am interested in how wider forces such as economics, politics, nature, and social norms shape and affect people’s personal lives. I am drawn to personal accounts, narratives and life stories and use these anecdotes to explore society and how it operates. I take what may be considered mundane objects or ordinary places as my source material because of what they can reveal about people, their past and the events that have shaped their lives. A large amount of my practice is based around drawing. I am continually drawing.

In my wider practice I have exhibited both regionally and nationally. I was short listed for the  Jerwood Drawing Prize in both 2012 and 2017 so my work was shown at the Jerwood Space London, then toured with the show. I also have exhibited in 'Drawn' the Royal West Academy biannual, Bristol in  2013 , 2015 and 2017.

I have exhibited at The Centre for Recent Drawing, London in a group show, entitled “Drawing Diary” and was part of a panel discussion about the work Led by Paul Gravett. Artist, curator and writer Sarah Lightman curated this show and the show later travelled to a drawing conference at the University of Northampton. My work has appeared in a number of print and on-line reviews and articles, including Art Rabbit and a-n. I have also been awarded Arts Council funding for a number of projects as well as funding from other sources such as The Heritage Lottery Fund.

Past Funded Projects include 2015 The Pencil Line. This project was funded by Arts Council England in partnership with Virgin Trains. It gathered over 400 drawings from the general public traveling on trains via drawing packs left in train carriages, all of these drawings were then displayed in an online gallery www.ThePencilLine.com. The project also made 2 editions of ebooks and ran drawing workshops on-board trains for socially excluded adults from St Mungo's Broadway, Bristol Drug project and Space2. I made a large  body of work in response using the train as a mobile studio, drawing continually as I travelled. During the project I travelled over 4763 miles traveling many times from Bristol to Preston and Carlisle. I made drawings on long papers each over 5 metres long titled 'OUT' and 'RETURN' which documented the journey’s landscapes and people in order from Coventry to Preston- OUT and Preston to Coventry- RETURN. I also drew on over 450 train tickets, which I displayed in many forms making large instillations of over 10 metres long.

In 2012 I completed the project 'Tea Stories' Funded by Arts Council England, The Heritage Lottery Fund and Sparkplugs. This project explored the working lives of over 80 ex Brooke Bond employs who used to work in the building, which now houses Spike Island Arts Space, as it was once a former Brooke Bond Tea factory. I was able to gather over 80 ex employees, for reunion events, many of whom I interviewed and gathered oral histories, old photographs and objects from. I then made a large body of work in response. This included an artist book, made in the form of the Brooke Bond tea card albums, which documented the working lives of the Brooke Bond Tea factory. I was then able to give the book as a memento to all the ex Brooke Bond staff that I had found. I also made a number of drawn and sculptural works including a wedding dress made out of tea bag paper made in response to discovering that the making of tea bag wedding dresses was traditional in the factory, one being made for each bride on her last shift before her marriage. As a result of the project ex Brooke Bond staff members now run their own reunion events, their last reunion being on the 25th September 2015 and was attended by over 200 people.

Residencies include The  Rednile Project Space, Sunderland.  During the residency I was commissioned to respond to their studio Space buildings and consequently I started to explore the surface of the building, finding buttons buried in the floor.  I later established they were a residue from a period when the building was used as a garment factory. I then advertised and found an ex-employee who I then interviewed. It transpired that the buttons were the remnants from a run of trousers and blouses made for Marks and Spencer in the early 80’s. I discovered much about attitudes to work at the time and how workers were abruptly made redundant in the late 80’s recession and how this affected the local community.  In response to this dormant history I made a new body of work, which included drawings, a short film and an audio piece.